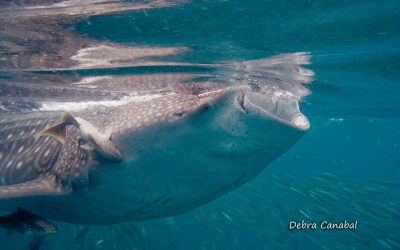 The IUCN have announced that whale sharks are sliding towards ‪#‎extinction‬. The worlds largest fish, is now listed as endangered on the IUCN Red List of Threatened Species (previously listed as Vulnerable).

Whale Sharks have previously been targeted in large-scale fisheries from India, the Philippines and Taiwan, with hundreds of sharks caught annually in each country until species-level protections were implemented (Rowat and Brooks 2012). A smaller directed fishery occurred in the Maldives until Whale Sharks were protected in 1995 (Anderson and Ahmed 1993). Broader-scale subpopulation reduction caused by these fisheries was raised as a possible driver of declining sightings in Thailand (Theberge and Dearden 2006) and Western Australia (Bradshaw et al. 2008). Occasional directed catch or bycatch of Whale Sharks has been documented from many of their range states, particularly where large-mesh gillnets are in common use (Rowat and Brooks 2012).

Tuna are often associated with Whale Sharks, and tuna purse-seine fisheries often use Whale Sharks as an indicator of tuna presence, even setting nets around the sharks (Capietto et al. 2014). Direct mortality in purse-seine fisheries appears to generally be low, recorded as 0.91% (one of 107) and 2.56% (one of 38) of sharks where fate was reported by observers in the Atlantic and Indian Oceans, respectively (Capietto et al. 2014). However, estimated mortality rates in the Western Central Pacific purse-seine fishery were higher: 12% for 2007–2009 and 5% in 2010. This extrapolated to a total mortality of 56 sharks in 2009 and 19 in 2010 (Harley et al. 2013). Observer reports on release condition from this region from 2010–2014 were generally consistent, with 50–60% of encircled sharks released alive, 5–10% dying and 30–40% of status unknown (Clarke 2015). Assuming a poor outcome for the latter category, potential mortalities in 2014 range from a minimum of 11 to 42, with a higher number possible depending on longer-term survival of the sharks released alive (Clarke 2015). Available data on the number of Whale Sharks caught are likely to underestimate total catch (Clarke 2015). The longer-term survivorship of Whale Sharks released from nets has not been examined at this stage. Common release practices, such as being lifted or towed by the caudal peduncle, are likely to cause stress, injury and possibly death to the sharks.

Shipping lanes, where they are placed close to Whale Shark feeding areas, can create a serious risk of vessel strikes. Whale Sharks routinely feed at the surface (Motta et al. 2010, Gleiss et al. 2013), and propeller injuries are commonly recorded during monitoring programs (Rowat et al. 2006, Speed et al. 2008, Fox et al. 2013). While mortality events are seldom reported in the contemporary scientific literature, they were often noted from slower-moving vessels in the past (Gudger 1941). It is likely that fast-moving, large ships do not register or report impacts, and as Whale Sharks will typically sink upon death, these are unlikely to be documented (Speed et al. 2008). Areas where Whale Sharks appear to be at particular risk include the Mesoamerican reef countries in the Western Caribbean (Graham 2007, R. de la Parra-Venegas pers. comm.) and Gulf states (D. Robinson pers. comm.), where a high frequency of serious propeller injuries are observed during monitoring.

Inappropriate tourism may be an indirect threat to Whale Shark in some circumstances (for example from interference, crowding or provisioning). Marine pollution events occurring in Whale Shark hotspots, such as the Deepwater Horizon oil spill in the Gulf of Mexico in 2010 (Hoffmayer et al. 2005, McKinney et al. 2012), may result in mortality or displacement from preferred habitats. These more local threats, as well as potential future concerns such as climate change impacts (Sequiera et al. 2014), should be closely monitored.

Read more about the Whale Shark on the IUNC’s website 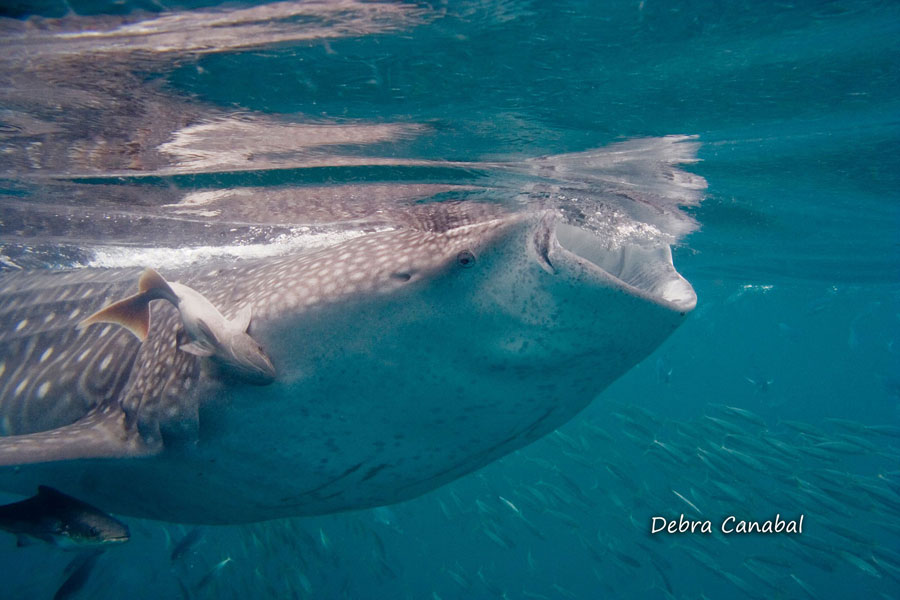 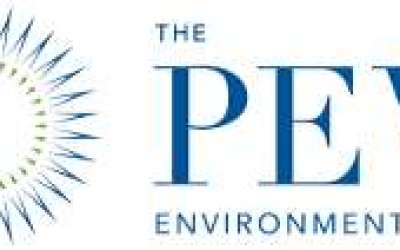 PEW fights for Sharks at the IUCN World Conservation Congress

PEW remains one of the leading conservation groups with an active voice towards shark protection. The group is attending the IUCN World Conservation Congress, sometimes described as the world’s biggest “trade show” for conservation and development. This year it will be held Sept. 6-15 in Jeju, South Korea.

This large global conservation event, bringing together some 4,000 delegates from governments and conservation organizations, aims to improve how we manage our interactions with the natural environment.

Pew is attending the conference to highlight a number of conservation issues and ensure that some of the biggest marine and terrestrial conservation challenges facing the world today are adequately addressed.

This is their statement on Global Shark Conservation:

The overfishing of sharks and resulting depletion of shark populations and species around the world risks the health of entire ocean ecosystems. Up to 73 million sharks are killed every year primarily to support the global shark fin industry, which supplies the market for an Asian luxury dish, shark fin soup.

Pew is extremely concerned that 30 percent of assessed shark and ray species around the world are classified by the IUCN Red List as threatened or near-threatened with extinction, and alarmed that approximately two-thirds of the shark species commonly caught in high seas fisheries are classified as vulnerable.

At the Congress, Pew is working with many partners on a motion to urge all shark range and fishing States to prohibit fishing vessels from retaining any sharks listed as critically endangered, endangered, vulnerable or near-threatened on the IUCN Red List, unless a science-based management plan is in place for the species.

Pew would like to see the IUCN Congress adopt a motion urging governments to take strong, meaningful action for shark conservation—whether within their waters or on the high seas—including strong management and enforcement efforts, and international cooperation. 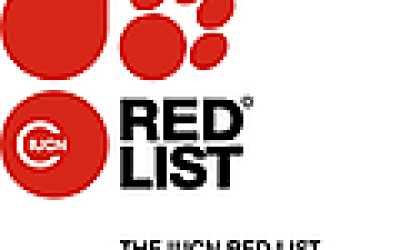 The IUCN, or International Union for Conservation of Nature, recently published the report from their Species Survival Commission Shark Specialist Group. The report can be downloaded in it’s entirety here.

Here’s an excerpt from their section on Oceanic Whitetip Sharks. It’s scary to see the dramatic reduction of animals throughout the oceans, particularly what’s happening in the Nothwest and Western Central Atlantic. The regional data their suggests a 99.3% reduction of the Oceanic Whitetip Shark population over just the past 40 years. While data varies in quality and there is not doubt insufficient data for precise measurements, fishing pressures need to be dramatically reduced while these calculations are fine-tuned. The current pace is moving at a terrifyingly unsustainable pace.

The Oceanic Whitetip Shark (Carcharhinus longimanus) is a formerly widespread and abundant large oceanic shark subjected to fishing pressure virtually throughout its range. It is caught in large numbers as a bycatch in pelagic fisheries, with pelagic longlines, probably pelagic gillnets and handlines, and occasionally pelagic and even bottom trawls. Catches, particularly in international waters, are inadequately monitored. Its large fins are highly prized in international trade although the carcass is often discarded. Fishery pressure is likely to persist if not increase in the future. Outside of the areas detailed below, this species is under similar fishing pressure from multiple pelagic fisheries and there are no data to suggest that declines have not also occurred in these areas, given there are similar fisheries throughout the range. As such, a precautionary global assessment of Vulnerable is considered appropriate for the Oceanic Whitetip Shark. Efforts are underway to improve the collection of data from some regions and effective conservation and management of this species will require international agreements.

The Oceanic Whitetip Shark is assessed as Critically Endangered in the Northwest and Western Central Atlantic because of the enormous declines that have been reported. Two estimates of trends in abundance from standardized catch rate indices were made from independent datasets. An analysis of the U.S. pelagic longline logbook data between 1992 and 2000, which covers the Northwest and Western Central Atlantic regions, estimated declines of 70%. An analysis of the Gulf of Mexico, which used data from U.S. pelagic longline surveys in the mid-1950s and U.S. pelagic longline observer data in the late-1990s, estimated a decline of 99.3% over this 40 year time period or 98% over three generations (30 years). However, changes in fishing gear and practices over this time period were not fully taken into account in the latter analysis, and there is currently debate as to whether or not these changes may have resulted in an under- or overestimation of the magnitude of these declines.

The International Union for Conservation of Nature Red List