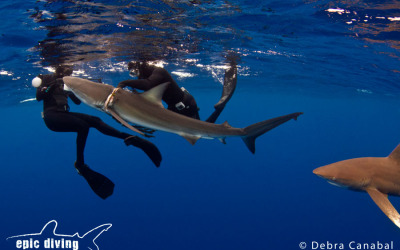 During this past Oceanic Whitetip Shark Diving season on Cat Island, the crew at Epic Diving successfully rescued a dusky shark in desperate need of help.

The crew and guests of our annual A Cotton Photo expedition were horrified to see a large male dusky shark arrive near the boat with a very deep wound around his head. The animal never got close that first day, but we were able to see a large rope, presumably discarded fishing gear, that was tightly wrapped around his neck, just behind the gills. He was rather skittish and would not approach any of the divers, so we never had a chance to intervene. 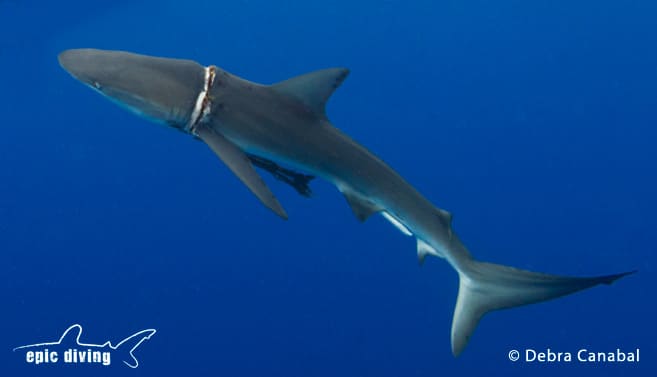 On the very next day, we were all surprised that he returned to the boat. This day, his behavior was much different. He came very close to the group and it was quickly apparent just how significant his predicament was. Not only could we see how deeply the rope had dug into his skin, but one of his pectoral fins was pinned back, and the shark was incredibly skinny. He was a large male with a disproportionally huge head on his emaciated body.

Everyone agreed, we had to do something. This shark was dying a slow death. We worked slowly and cautiously to feed the shark a few bits of fish, we he gladly ate up. After realizing that he was approaching closely and confidently, we put our plan in motion to free him from the rope.

The guests were very courteous giving up there time in the water with 5 Oceanics and the dusky, so that we could attempt the rescue as safely as possible. Vincent and Debra Canabal, owners of Epic Diving, along with Amanda Cotton, the expedition leader, slipped back into the water with a few tools, and cameras. We used some more bait to lure the shark closer to us, as well as to distract him from our mission. We were all fearful that we’d only get one attempt at the rescue. If the shark felt pain or threat, he’d likely take off and we’d never seem him again.

As the shark came in, we managed to get right behind his head (and mouth) as he approached to bait. As gentle as possible, the rope was lifted from his flesh and a pair of Tripura shears made quick work to cut it off. While doing this, the shark rolled over completely epithelial a bit if thrashing, and spun right out if the rope.

At that same moment, all 5 oceanic whitetip sharks changed their behavior immediately. They simultaneously charged at the divers and dusky shark in a rather agitated way. Fortunately, the crew was able to keep the oceanics at bay and they won pent back to their normal, calm behavior just as quickly as they changed.

The dusky shark stayed with the group for another few hours and we all wished him well as the boat pulled away. 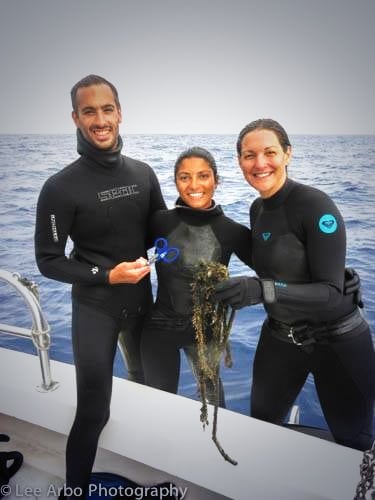 Once back on the surface, we reAlized why the oceanics behavior changed so suddenly. The rope that was around his neck smelled worse than the chum we used and we believe the oceanics were simply trying to join the kill they likely thought we initiated. With the obviously wounded shark, the smell from the wound, and the rolling dusky, the oceanics must have thought we went in for the kill. As soon as they realized the dusky was fee, swimming better than before, they backed off.

It was a truly incredible and rewarding experience. Amanda Cotton gave Atlas his name, very fitting give the experience. We all hoped to see him again, but would have to wait nearly a month for that.

A few weeks after the incident, the crew was thrilled to see him come back up our chum slick. Atlas was back, and looked so much better. The top, deepest part, of the wound had almost completely closed and he he certainly gained weight. From that day on, he was a daily visitor to the boat, and let’s just say, we tried to fatten him up. He remained a reliable visitor for the rest of our season and we are anxious to see if he’ll be around next year. 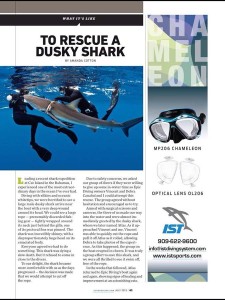 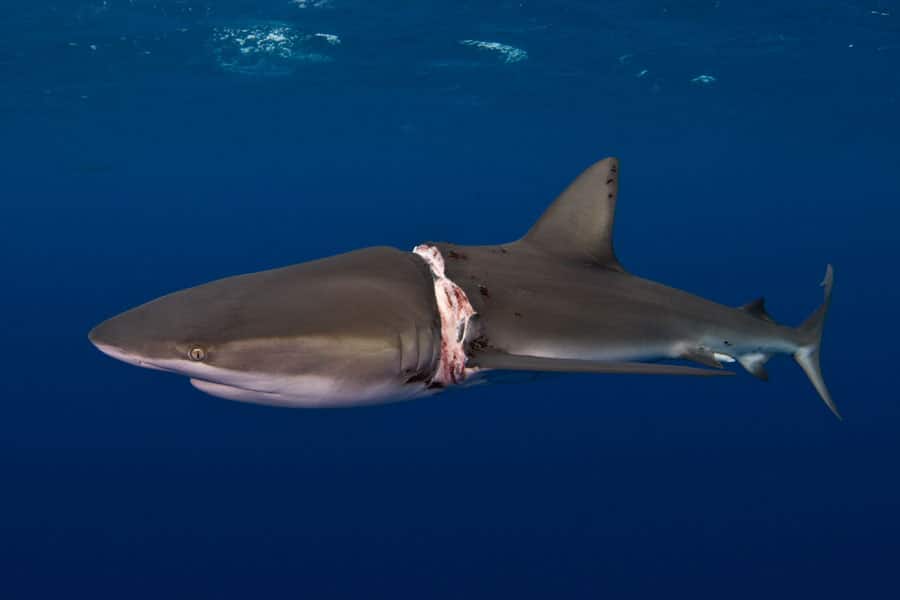