the best on the planet

From the ubiquitous caribbean reef sharks and nurse sharks to the larger than life tiger sharks, to the ultra rare great hammerhead and oceanic whitetip sharks, the Bahamas has it all.  While there are chances to see sharks at each of the islands, some of the highly sought after encounters can be reliably found at certain times of year, at certain locations. 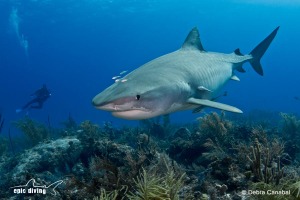 While it’s possible to find tiger sharks off the coast of many Bahamian islands, Tiger Beach off the northern tip of Grand Bahama Island is world famous for these encounters, and for good reason.  The dive conditions here are some of the best for shark encounters and hard to beat for photographers.  Generally, dives with tiger sharks are done in shallow water, typically around 20-30 feet deep.  The ambient light is plentiful and the sharks come close, ideal conditions for underwater photography.  The tiger sharks are here year round, but seem to build in numbers over the winter months.  Divers can expect to seen anywhere from one to a dozen or more of these magnificent predators surrounded by countless caribbean reef and lemon sharks.  And there’s a lot more than just the classic sandy bottom of Tiger Beach.  This area of the Little Bahama Bank also offers some incredible reef diving with loads of life like turtles, eels, grouper and stingrays.  The reefs are typically a bit deeper, starting off at depths around 40 feet.  They offer an array of colorful backgrounds for the “men in the grey suit.”  A bit further North, Sugar Wreck is also a favorite of guests.  It’s very shallow, around 15 – 20 feet deep, and covering in marine life.  It’s a great spot for both diving and snorkeling. 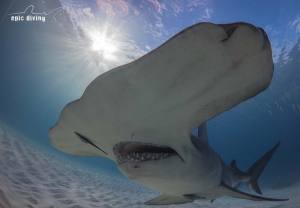 Before the world knew about Bimini’s great hammerheads, encounters with this species was generally rare, brief, and unreliable.  That has all changed.  Each winter and early spring season brings large numbers of these magnificent sharks right off Bimini’s shores and for the first time, divers can book excursions dedicated to seeing this species.  The largest of all the hammerhead sharks, these guys can reach reported lengths of 20 feet.  Their huge dorsal fin is reminiscent of an orcas, towering above their bodies.  Like tiger beach, the dives here are also shallow, allowing for extended bottom times.  Nurse sharks are present on almost every dive and bull sharks tend to make an appearance as well. 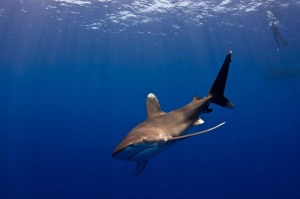 The oceanic whitetip is a pelagic species and was once considered the most numerous marine animal over one hundred pound in the worlds oceans.  Unfortunately, they have suffered dramatic declines over the past 5 decades and are now quite rare.  Cat Island is one of the last hotspots to find this species, and truly the only location to book a trip dedicated to seeing them.  During the spring months, female oceanics congregate in the deep water just offshore.  Encounters with the oceanics are done as blue water drift dives.  Divers can expect to see oceanic whitetip sharks and also have the opportunity to see a variety of other pelagic species, such as silky sharks, dusky sharks, mahi mahi, tuna, and even blue marlin.

The Bahamas takes pride in it’s shark ecotourism and understands the important role sharks play in their ocean environment.  Building on the long line ban in 1992, the Bahamas created a shark sanctuary in 2011 protecting sharks against any commercial use in the nearly 250,000 square miles of ocean surrounding the country.  Whether your thinking of adding a few shark dives to your logbook, or are an experienced shark diver and/or photographer, the islands of the Bahamas has some of the best big animal encounters around.