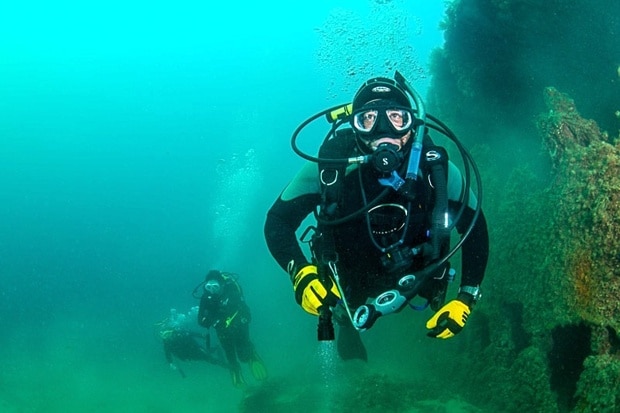 A British scuba diver is fighting extradition to Malta where he faces charges of killing his partner and their friend during a holiday.Stephen Martin was diving off Gozo in June last year with eight friends.

This seems to be a crazy story. Stephen Martin wad diving with friends when he says that his dive partner and girlfriend of 5 years suddenly and unexpectedly dropped from a depth of 49 feet down to 114 feet. He quickly descended after her with another diver, but when they reached her, she was unconscious and limp. The second diver apparently panicked and ended up dying as well, although those details are unclear. Mr. Martin, who is a SCUBA instructor, brought his girlfriend to the surface and began administering rescue breaths. She was apparently foaming at the mouth and cyanotic (blue in color). Although he was an instructor, Mr. Martin was simply on holiday with friends; he was not conducting any form of SCUBA training and was not even serving as a dive master/leading the group.

Legal papers show that a Maltese investigating magistrate had concluded that Mr Martin was “negligent in his obligation” to keep a close watch on Ms Hooley, did not realise she had got into difficulties, failed to give first aid while under water and failed to check the weather forecast. Mr Martin is under night-time curfew and is banned from leaving the UK, but is supported by one of the world’s leading authorities on diving incidents.

It seems his extradition was approved by authorities in the UK and he will need to go to Malta to face charges in their deaths and up to 10 years in prison. He is currently appealing the extradition, with much support on his side.

I couldn’t imagine being in this position! What are your thoughts? Feel free to comment below and let us know what you think.