We were thrilled to share the story of Atlas with Oceana, the largest international advocacy organization focused solely on ocean conservation.  They recently launched a campaign to bring awareness of the serious population declines of the dusky shark, and their desperate need for protection. 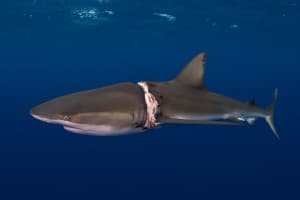 On the road to recovery, Atlas the Dusky Shark is free from his rope

Atlas was a large male dusky shark that came by our boat during this past Oceanic Whitetip Shark Diving season on Cat Island.  He had gotten his head caught in a rope which was causing a large wound circling his entire head.  Although a large adult shark, he was clearing very thin, even starving.  The rope was around his gills and pinning down one of his pectoral fins.  He was swimming awkwardly and unlikely to be able to hunt.  Atlas was not shy swimming among the group of divers and oceanic whitetip sharks.  After some time, he was getting closer and closer to us and it was obvious how serious his condition was.  We knew that if he rope was not removed, he would surely die.  We decided we had to make an attempt to cut him free.  The group, lead by Amanda Cotton of A Cotton Photo agreed to suspend their dive so that the crew could attempt the rescue.  It was uncertain how the dusky shark would react, and the group waited patiently on the boat to decrease the risk.

The shark swam slowly right up to the the three of us and Deb, Vin, and Amanda were able to cut the rope off and document the rescue.  It was one of our most rewarding experiences in the ocean and are so happy Oceana shared the story.

Here is an infographic from Oceana about the dusky sharks.  Check out their website for more great information.

The Dusky Shark is in serious need of protection