A Death of a Great Hammerhead

trophy hunting, at it's worst.

A large and very pregnant, great hammerhead shark was recently killed by a group of fisherman in Destin Florida, aboard the boat Phoenix.  The catch occurred greater than 3 miles offshore so current legislation to protect against this was irrelevant.  This shows how ineffective the current protections can be.

Here’s a video of the shark being cut open at the dock and 33 pups removed from her womb.  The sharks fins and jaw have already been removed in the video.

Great  Hammerhead sharks are listed as endangered on the IUCN (International Union on the Conservation of Nature) and currently protected in Florida waters.

Many in the shark community are already aware that these sharks are extremely vulnerable to stress and often die as a result of fighting on a fishing line.  This is especially true of pregnant females.  Because of this, current research on great hammerheads has changed practice and no longer relies on hook and line to study the animals.  The researchers in Bimini are swimming alongside the great hammerheads and using a pole spear in insert tracking tags.

There has been quite a backlash against the fishing boat after they described their trophy on social media pages.  The charter boat said that they would have released the shark, but it died in the long battle.  This, to me, was an unnecessary death of 34 great hammerhead sharks, currently endangered.  If a charter boat is going to go out and fish animals for sport, they should know the impact they are having.  They should have known that this hammerhead was extremely unlikely to survive and the line should have been cut immediately.

It’s unfortunate to see an event like this and know that this is a sport, all for a trophy or photo.  While commercial fishing efforts have the biggest impact on the current decline of shark populations worldwide, this trophy hunting behavior/sport is even more upsetting. 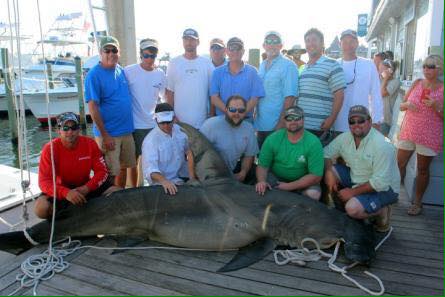 If you’d like to dive with great hammerhead sharks, sign up with a reputable operator and see the animals swimming healthy and free in the natural environment. 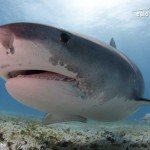