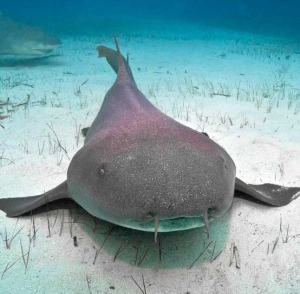 Nurse shark in the sand

Its body is yellow-brown to gray-brown, with or without small dark spots and obscure dorsal saddle markings. Mouth is set forward of eyes and is relatively high up on the head – maintaining a more forward position. Noticeable barbells are present, along with nasoral grooves (though there are no perinasal grooves). Spiracles are minute. Dorsal fins are broad and rounded, with the first dorsal being considerably larger than the second. Dorsal fins are set relatively far back along the ventral surface. The upper lobe of the caudal fin is considerably longer than the lower lobe. The caudal fin itself comprises roughly one quarter of the overall body length.

They can get quite large with a length of up to 4.5 meters (15ft) as adults. These large creatures reach weights as high as 150 kilograms (330 pounds). Typically, they live to between 25 and 35 years of age.

Unlike most sharks, which require constant motion to move water over their gills and maintain a sufficient internal blood pressure, the nurse shark often remains motionless along the bottom – actively pumping water over its gills through the continual opening and closing of its mouth.

They prefer warm seas and range through the Atlantic and east Pacific. This species is often found along reef sites, within mangrove channels, and on sand or sea grass flats. They are often observed at depths of a meter or less within the intertidal zone, though they are known to range down to depths of at least 12 meters.

Nurse sharks have long elegant lines, and, since they move sluggishly, you don’t have to worry about scaring them away. Nurse sharks are nocturnal animals, spending the day in large inactive groups of up to 40 individuals. They can be a special sight when encountered in such groups. Nurse sharks are generally considered to be a docile shark species. Virtually every tallied attack has been provoked, so unless one tries to pull its tail, you will have a safe close encounter, should you meet one.

Check out this nurse shark ID guide from The Shark Trust.