The oceanic whitetip shark, Carcharhinus longimanus, is a pelagic shark, roaming the open ocean. It is distinctive by its white tipped first dorsal, pectoral, pelvic and caudal fins. The body color of the oceanic whitetip shark ranges from grayish bronze to brown. Its underside is white, although some specimens possess a yellow tinge. The shark has several kinds of teeth. Those in the mandible (lower jaw) have a thin serrated tip and are relatively small and triangular (somewhat fang-like). There are between 13 and 15 teeth on either side of the symphysis. The teeth in the upper jaw are triangular, but much larger and broader with entirely serrated edges—there are 14 or 15 along each side of the symphysis. The denticles lie flat and typically have between five and seven ridges.

The oceanic whitetip shark is known to grow to a considerable size, with some specimens reaching 13 feet (4 meters). However, the usual size for an adult whitetip shark is below 10 feet (3 meters) in length. The maximum recorded weight of a whitetip is 370 pounds (167 kg). The female specimens usually tend to reach greater lengths than males. The oldest specimen was recorded to be 22 years old.
They are considered vulnerable species since they’ve mostly been hunted in large numbers, primarily because of their fins.

The oceanic whitetip shark used to be common, widely distributed throughout the globe and found in deep, open water.  They are found worldwide between 45° north and 43° south latitude. They can usually be found well off shore in waters under 2600 feet (200m) deep. They may be occasionally found closer to land in areas where the continental shelf is narrow, and offers access to nearby deep water. This is the case in Cat Island, Bahamas, where the drop off is incredible close to land and we can find depths over 1000 feet within a half mile of land. Some specimens have been seen as far as Ireland, since they have probably been lost following the Golf current. Their preferred water temperature is around 20 to 28 degrees Celsius. 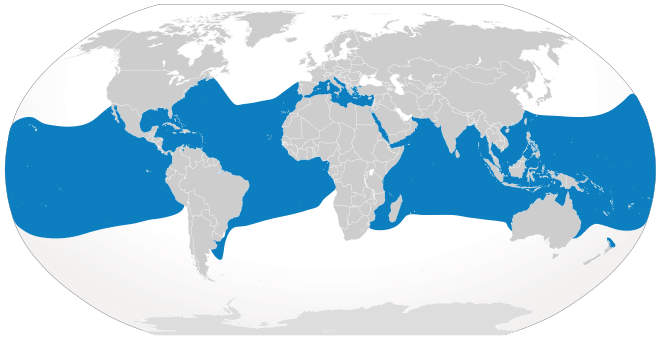 Distributed throughout the globe in temperate climates

In recent years, however, they have suffered from incredible fishing pressure and their numbers have declined dramatically.  Analysis of  the US pelagic longline data estimated over a 70% decline between 1992 and 2000.  Even more concerning data from the Northwest and Western Central Atlantic show declines of greater 90 percent.

The Oceanic Whitetip Shark (Carcharhinus longimanus) is a formerly widespread and abundant large oceanic shark subjected to fishing pressure virtually throughout its range. It is caught in large numbers as a bycatch in pelagic fisheries, with pelagic longlines, probably pelagic gillnets and handlines, and occasionally pelagic and even bottom trawls. Catches, particularly in international waters, are inadequately monitored. Its large fins are highly prized in international trade although the carcass is often discarded. Fishery pressure is likely to persist if not increase in the future. Outside of the areas detailed below, this species is under similar fishing pressure from multiple pelagic fisheries and there are no data to suggest that declines have not also occurred in these areas, given there are similar fisheries throughout the range. As such, a precautionary global assessment of Vulnerable is considered appropriate for the Oceanic Whitetip Shark. Efforts are underway to improve the collection of data from some regions and effective conservation and management of this species will require international agreements.

The Oceanic Whitetip Shark is assessed as Critically Endangered in the Northwest and Western Central Atlantic because of the enormous declines that have been reported. Two estimates of trends in abundance from standardized catch rate indices were made from independent datasets. An analysis of the U.S. pelagic longline logbook data between 1992 and 2000, which covers the Northwest and Western Central Atlantic regions, estimated declines of 70%. An analysis of the Gulf of Mexico, which used data from U.S. pelagic longline surveys in the mid-1950s and U.S. pelagic longline observer data in the late-1990s, estimated a decline of 99.3% over this 40 year time period or 98% over three generations (30 years). However, changes in fishing gear and practices over this time period were not fully taken into account in the latter analysis, and there is currently debate as to whether or not these changes may have resulted in an under- or overestimation of the magnitude of these declines.

The International Union for Conservation of Nature Red List

Similar to the tiger sharks, oceanic whitetip shark are slow swimmers, but one must always be cautious of the shark’s whereabouts since they are very curious and prone to closing distance between themselves and the diver. That being said, you don’t have to worry about scaring them away with your presence. Unlike many animals, it does not have a diurnal cycle, and is active both in the day and at night, which guarantees a wide window to encounter this species. Good judgment, temperate decision making, adequate training, knowledge and appropriate gear are a must. Learn more information about oceanic whitetip shark diving here.  It is also common to see Silky Sharks during these trips.