The Worst Shark Attack in History

the story of the USS Indianapolis

“The worst shark attack in history” 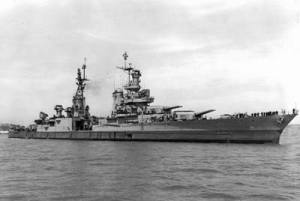 The story of the USS Indianapolis has become legendary with regards to shark attacks, and is known as the worst shark attack in recorded history.

USS Indianapolis was a Portland class heavy cruiser of the United States Navy. It was constructed to comply with the 1922 Washington Naval treaty, which limited the number of battleships constructed by the signatories and the displacement of other ships to 10,000 tons.

The Indianapolis was very active during the war. When the Japanese attacked Pearl Harbor, it was sent to search and destroy the Japanese carriers that participated in the attack. Unable to find them, it returned to Pearl Harbor. It was also a part of the attack on the Aleuts, driving the Japanese out of Kiska Island.

Since 1943 it served as the flagship of Vice Admiral Raymond Spruance, commander of the 5th Fleet. In that role, the USS Indianapolis had overseen operations such as the assault on the Mariana Islands, battle for Saipan, and the Battle of the Philippine Sea. 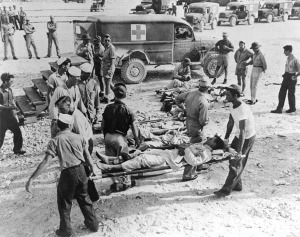 Chosen for a special mission, it departed San Francisco, and sailed to Tinian, carrying enriched uranium for the atomic bomb (which would later be dropped on Hiroshima). From there, it was sent to Guam to restock and replace a part of the crew which completed their tour.

On its way to Leyte Gulf, on July 30 1945, 14 minutes past midnight, its starboard bow was struck by two Type 95 torpedoes from the Japanese I-58 type submarine. The Indianapolis took a heavy hit, and settled by the bow. Twelve minutes later, it completely rolled over, then her stern rose into the air, after which it plunged down. Some 300 of the 1,196 crewmen went down with the ship. With few lifeboats and without enough lifejackets, the remainder of the crew (around 900) was set adrift.

Of those 900, only 321 survived. To this day it is considered to be the worst naval disaster in US history. The fact that the ship was sunk in waters filled with sharks is often perceived as the main reason for such great loss of men. Among those, the Oceanic whitetip sharks were the most numerous. However, most deaths can be contributed to lack of drinking water and food (help arrived on the fourth day) and the exposure to the elements.

After conducting an investigation, the Navy concluded that only about 60 men were the victim of shark attacks. It is presumed that the sharks didn’t bother attacking the survivors, since there were many dead bodies floating about. Dr. Lewis Haynes, the Chief Medical Officer aboard the Indianapolis, reported seeing only one shark himself.

The Indianapolis sent distress calls before sinking. Three stations received the signals; however, none acted upon the call. This postponed the rescue greatly and contributed to such a big casualty rate. The rescue came on the fourth day, when the survivors were spotted by a PV-1 Ventura bomber. The first ship to arrive on the scene was USS Cecil Doyle.

Quint Discusses the sinking of the Indianapolis in JAWS