Food and Agricultural Organization of the United Nations

State of the Global Market for Shark Products

A recent publication from the Food and Agriculture Organization of the United Nations provides a detailed and thorough reports of the world’s shark fin trade. In addition to the common notions of shark finning and shark fin soup, the 187 page report touches on all aspects of the global trade of shark/elasmobranch products such as livers or liver oil, shark or ray skin, cartilage, jaws or rostra, or manta or mobula gill rakers. It offers country specific data on import and export as well as economic implications of the trade.

The report is available in PDF form and can be viewed in it’s entirety.  Just click on the image below for a copy of the full publication and feel free to post your comments at the end of this blog. 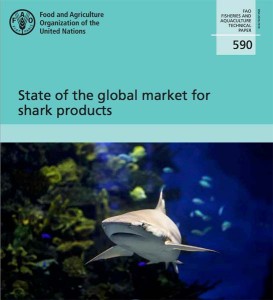 This publication focuses primarily on providing an updated picture of the world market for shark products using data that in many cases have only become available in recent years, such as origin and destination data. Where data are still lacking, an effort has been made to estimate the relevant figures through examination of the trade databases of the world’s major traders of shark products. This increased availability of data is believed to have allowed a more accurate – and up-to-date – initial evaluation of the relative importance of each country or territory, thus providing a more solid basis on which to target investigative efforts. The country-by-country assessments of shark fin trade recording practices also constitute another important area of focus that had not previously been addressed. However, given the primary objective of this study (above), those details that are necessarily not captured in such a broad-scale review will need to be identified and elucidated in regional or country-specific studies.