The summer blockbuster of 1975, Jaws, has captivated the imaginations of people worldwide. At the same time, it’s also nurtured our instinctual fear of the unknown, and resulted in an irrational terror of sharks. The movie, however, has some basis in reality, and here’s the story. 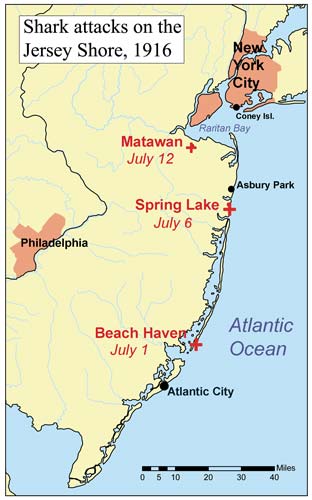 In a span of just under two weeks, the New Jersey coast was home to a series of fatal attacks in the summer of 1916.  From July 1 – 12, four people lost their lives and another was seriously injured.  The type of shark responsible, and the number of sharks involved, has been debated by experts since the event took place nearly 100 years ago.

Most now believe there could only have been two possible culprits: the great white shark and/or the bull shark.  Although no one can say for sure, there are convincing arguments for both species.  Whether or not there was just one rouge shark, or several responsible for the attacks, also remains a mystery, not likely to be solved.

The first incident took place in the seaside town of Beach Haven, just north of Atlantic City.  A 25 year old man from Philadelphia, named Charles Vansant was vacationing with his family at the time.  During the early evening of July 1, Vansant decided to go for a swim with his dog.  Soon after, witnesses reported hearing him begin to shout and frantically swim to shore.  The lifeguard on duty helped to pull him from the water and claimed that the shark followed him to shore.  He was brought to the Engleside Hotel where he was staying.  All the flesh from his left upper leg had been removed and he bled to death on the manager’s desk.  The time was 6:45pm. Check out this clip from the Smithsonian Channel. 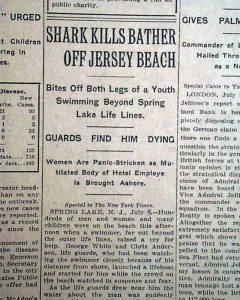 Forty miles north of the first shark attack, Spring Lake saw the next major event on July 6th.  Also in the evening hours,Charles Bruder, 27 years old, was just a few hundred feet from shore when he was bitten in the abdomen and legs.  Witnesses there reported that the water turned red with blood.  Hearing the screams, 2 lifeguards made it out the Bruder in a lifeboat and recovered his mutilated body.  He was dead before they reached the shore.

On July 12, two people were killed in Matawan Creek, another 30 miles north of the prior attacks.  The first individual was Lester Stillwell, an 11 year old boy.  He and a few friends were playing in the creek when they noticed a shadow in the water.  At first, they thought it was an old log or piece of wood until the dorsal fin broke the surface.  Realizing it was a shark, the boys fled the creek but Lester was pulled under by the shark before he was able to escape.  His friends ran into town to get help and returned with several townspeople.  One of those who came to investigate was Watson Stanley Fisher, a 24 year old local businessman.  He dove into the creek to recover Lester’s body and was attacked by a shark in front of the others.  He suffered devastating injuries to his right leg and died a few hours later at Monmouth Memorial Hospital.  Lester Stillwell’s body was recovered just 150 feet upstream two days later. 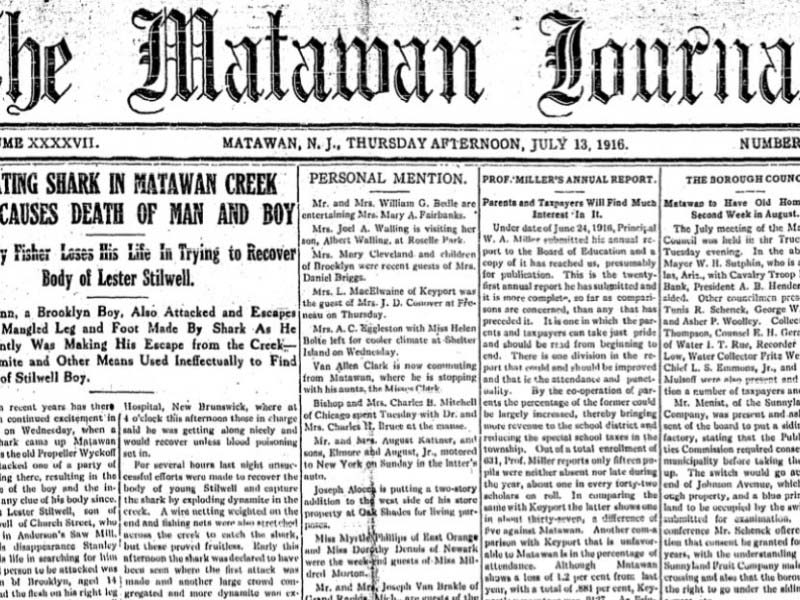 The final attack occurred on the same day less than half of a mile from the prior attacks.  This time was different only in that 14 year old Joseph Dunn survived the attack.  The shark clamped down on his leg and a tug-of-war ensured between the shark and Joseph’s brother and friend.  Fortunately he was pulled out of the water and rushed to St. Peter’s Hospital in New Brunswick were he spent the next several months recovering from serious injuries.

Check back later for Part 2/2: The aftermath to learn about the ensuing panic and shark hunt!