Did you miss the first article:  1916 Shark Attacks: The Real Jaws

As you can imagine, news of the string of attacks sparked mass hysteria, on a national level, although it was not immediate.  After the first incident, the state fish commissioner of Pennsylvania wrote in the Philadelphia Public Ledger:

“Despite the death of Charles Vansant and the report that two sharks having been caught in that vicinity recently, I do not believe there is any reason why people should hesitate to go in swimming at the beaches for fear of man-eaters. The information in regard to the sharks is indefinite and I hardly believe that Vansant was bitten by a man-eater. Vansant was in the surf playing with a dog and it may be that a small shark had drifted in at high water, and was marooned by the tide. Being unable to move quickly and without food, he had come in to bite the dog and snapped at the man in passing.”

After the second incident however, the news made front page of major national newspapers including the Washington Post, San Francisco Chronicle, Chicago Sun-Times, and Boston Herald.   The result was an approximated $250K decline in tourism which amounts to over $5 million dollars at 2015 rates.  Resort towns enclosed their beaches with steel nets but that did little to reassure the public. 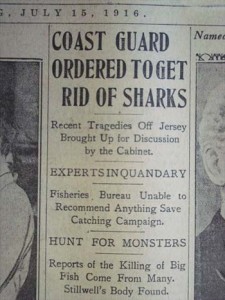 The ensuing shark hunt was sanctioned by local governments all the way up to the federal level, in many cases offering significant rewards.  Hundreds of sharks were captured and killed along the east cost in what has been described as the greatest shark hunt in history.

Mystery remains whether there was a single rogue shark responsible for the string of attacks, or if there were several animals involved.  The two most likely culprits are the Great White Shark and the Bull Shark.  Many believe that a great white was responsible, but since the final attacks all occurred in Matawan creek miles from the ocean where salinity levels are low, others feel it had to be a bull shark.

On July 14th, 2016, just days after the final attacks, a shark that was later identified as a great white, was captured in Raritan Bay, just a few miles from Matawan Creek.  Michael Schleisser offered a heroic tale of the battle with the 7.5 foot shark, stating that it nearly sunk his boat before he was able to beat it to death with a broken oar.  After getting the shark back to shore, the animal was identified as a great white shark and the contents of it’s stomach included “suspicious fleshy material and bones,” later found to be human remains.  After this catch, there were no more attacks and the media proclaimed that the rogue shark had been killed.  The only surviving photo of that shark is from the Bronx Home News. 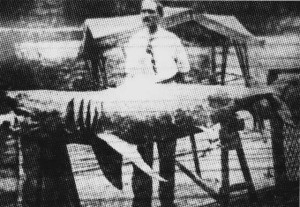 There is likely to be continued debate over the number of sharks and species responsible for the incident.  The International Shark Attack File officially reports the great white as the responsible shark.  It’s director, George Burgess states:

“The bull draws a lot of votes because the location, Matawan Creek, suggests brackish or fresh waters, a habitat that bulls frequent and whites avoid. However, our examination of the site reveals that the size of the “creek,” its depth, and salinity regime were closer to a marine embaymentand that a smallish white clearly could have wandered into the area. Since an appropriate sized white shark with human remains in its stomach was captured nearby shortly after the bites (and no further incidents occurred), it seems likely that this was the shark involved in at least the Matawan fatalities. The temporal and geographical sequence of the incidents also suggests that earlier bites may have involved the same shark.”

The incident, now nearly 100 years old, single handedly changed the nations attitude toward sharks.  Before the fatal shark attacks of 1916, it was not believed that sharks could or would attack healthy bathers near shore.  In fact, some felt it attacks were more likely the result of a large sea turtle.  Much has changed in public perception and scientific knowledge, and this incident had a major impact on that.