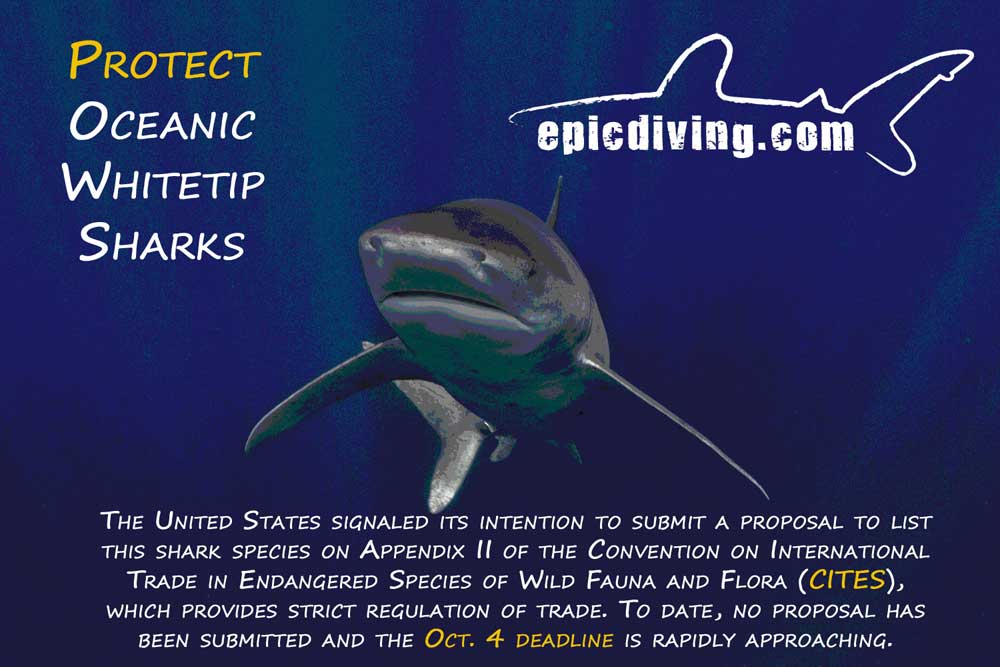 This information was sent out by PEW to help get people involved in this part of shark legislation. You can find the info on PEW’s site here.

On the site, you can enter your information and send the email out to your Senators, Representative, and Secretary Kenneth ‘Ken’ Lee Salazar. The whole process takes less than a minute, and could help raise awareness among the decision makers about the depth of the problem.

Here’s the email that will be forwarded on your behalf:

Dear [Decision Maker],
The global demand for shark fins, meat, liver oil, and other products has driven numerous shark populations to the brink of extinction. Their life history characteristics, such as slow growth, late maturation, and production of few offspring, make sharks particularly vulnerable to overfishing and slow to recover from decline.

In particular, global populations of oceanic whitetip sharks have fallen significantly. They are listed as Critically Endangered in the Northwest and Central Atlantic Ocean, and Vulnerable globally, according to the International Union for Conservation of Nature (IUCN) Red List of Threatened Species. In the Gulf of Mexico, scientists estimate that oceanic whitetip populations have dropped by 99 percent in just over four decades.

Although a few countries and regional fisheries management organizations have started to take steps to address the worldwide decline of oceanic whitetip sharks, these measures do not have the global reach that a listing under the Convention on International Trade in Endangered Species of Wild Fauna and Flora (CITES) would have in helping this vulnerable species. The next opportunity to protect additional species under CITES will be in March 2013 in Bangkok.

It really only takes under one minute to get it done, and you’ll receive a confirmation from each of the officials letting you know your voice was heard.