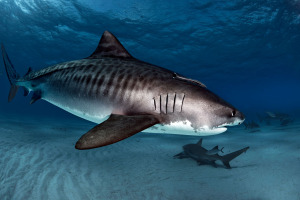 Known for the stripes that appear on their back, tiger sharks are a relatively large species of shark that live primarily in tropical and subtropical regions around the world. While the stripes do appear distinctly in younger tiger sharks, as the sharks grow and mature, the stripes actually begin to fade and become much less apparent on adults.

Tiger sharks are one of the largest shark species, just behind the more-famous Great White Shark. Born at only 20 – 30 inches long, they have been know to reach lengths of up to 16 feet (5 meters) as adults, with some larger specimens reported. Adult females tend to be larger than adult males. The tiger shark also has very unique teeth, easy to distinguish from any other shark species. Their upper and lower jaws are identical. 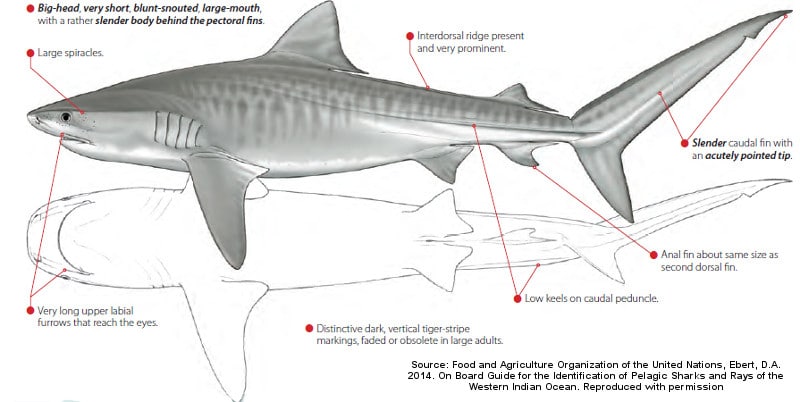 Tiger sharks are not afraid swimming closer to coastal lines which make them a perfect species of shark to see, and one of the most popular, if you are looking for any type of Bahamas shark diving adventures.

In addition to being very common among warm coastal waters, another reason that the tiger shark is so popular during Bahamas shark diving expeditions is that the animal is extremely inquisitive and unafraid.
As a result, shark divers won’t have to worry about scaring away a tiger shark as easily as other species, like the great hammerhead, which can present a great opportunity to examine and photograph one of the ocean’s greatest predators. A tiger shark that was tagged in the Bahamas was noted to follow the Gulf Stream as far north as Cape Cod. They tend to remain in deep waters that line reefs, occasionally exploring more shallow water. Tiger sharks have been recorded at depths of 900 meters, or 3,000 feet! 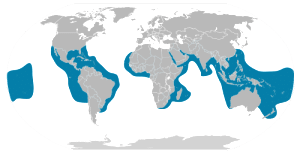 Tiger shark range and distribution. Image by The Emirr

Tiger sharks are excellent scavengers with amazing eyesight, even in comparison with other shark species, and are known to have an extremely keen sense of smell. Those skills make them particularly effective night time predators.

Most of the tiger sharks you’ll encounter at Tiger Beach are well behaved, slow moving animals.  There’s no mistaking their large size and tremendous power, but it’s unusual to get such a display.  Divers can expect that the tiger sharks will swim right up to them and must pay close attention at all times.  There are often multiple animals and occasionally a dozen or so individuals at the boat.  SCUBA diving with these sharks means keeping your head on a swivel and taking notice of where each shark is at all times.  It’s easy to get focused on the sharks that are in front of you and forget to notice the ones behind you.

Want to Dive with Tiger Sharks?